The History of Lyric Music Theater

In 1952, a dedicated group of musically-minded performers felt the Greater Portland area was in need of such a group, who would “foster interest in theater, particularly as applied to music and drama and to provide a medium for the expression of such interest.” So, Lyric Music Theater was formed. Originally known as Portland Lyric Theater, initial meetings were held at the YMCA and Lee Recreation Building in Portland. The first production, “Kiss Me, Kate” was rehearsed at the Three Arts Studio and opened at the Deering High School auditorium in February of 1953. The show was acclaimed as, “innovative and exciting music theater.”

With rapid growth, it soon became clear that Lyric needed larger and more available quarters. The group moved to a vacant movie theater on Stevens Avenue in Portland. The theater, known as the Doll House, and formerly Hoegg Hall, became the first permanent home for the Lyric Theater troupe and many successful shows were produced. At the close of the 1971 season, disaster struck when an explosion and fire destroyed the Doll House and its contents. Costumes, lights, flats, drapes, and the entire music and script library were lost. Lyric then moved into temporary quarters on Middle Street in Portland and began producing shows in various locations around the city. Six years later, Lyric left the temporary space and moved into its present home at 176 Sawyer Street.

Lyric’s new home was built in 1903 as a Pentecostal church, later to be known as the Church of the Nazarene. Little had been done for improvements and repair’s and the building was extremely run down when the Nazarene vacated the premises in the early 1970s to move into more spacious quarters on Highland Avenue. When Lyric Theater acquired the building in 1977, the roof leaked, gutters sagged, and the basement filled with water with each new tide. Considering the state of disrepair, the initial move into the Sawyer Street complex was in to the abutting gymnasium/recreation hall. When the time came to open the first show, the fire department wouldn’t allow it because the electrical outlets weren’t up to code. The Portland Players came to the rescue and offered the use of their facility. And so the first show of Lyric Theater held in South Portland was on the Portland Players stage on Cottage Road.

Since then, the former church structure has been transformed into what is now known as the Cedric Thomas Playhouse, named for the man who first purchased the space for the theater. In 2001, Lyric celebrated the culmination of a major building project which saw the opening of a new lobby in what had been the old church gymnasium, a new connector from the lobby to the performance space, and additional space in the shop and costume area. In 2003, the addition of a lift made the building handicap-accessible. At this time, the theater also changed its name from Lyric Theater to Lyric Music Theater to reflect the original commitment and dedication to musical theater. 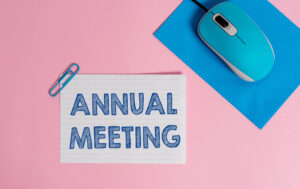 June 29, 2021, 7:00 PM, please join us for Lyric Music Theater’s Annual Meeting, brought to you remotely via Zoom, link to be shared on Facebook and on our website prior to the meeting. The agenda will include reports from the Board of Directors, including news on our 2021-2022 season and re-opening plans, updates on the progress of theater renovations, election of new officers, scholarship announcements, and approval of the 2021-2022 budget. Voting is open to all members. Members include flex pass holders from 2019-2020 and anyone who volunteered at Lyric including casts and crews, ushers, box office help, work-day participants, etc. Come hear all the news!!

If you have the Zoom App installed, simply tap this link to join Audio/Video meeting from your iPhone/iPad/Android/Mac/PC/Chromebook:

We look forward to seeing you online!!

Support LMT!
Lyric Music Theater is a volunteer organization and a 501(c)(3) non-profit. Your donation helps ensure that we can continue to bring quality theater to Greater Portland. Consider a donation today!
We appreciate your support and generosity and look forward to a brighter 2021!